So I’ve talked my critique group into helping me to create and produce an anthology of sorts. I’ve always thought about submitting stories to anthologies, but I got the idea that it would be a great project for the group – allowing us some relief from our main projects, and for a few of the folks who are writing non-fiction, to try their hand at short stories.

We brainstormed for a while on a theme, but struggled to find a central idea each of us was equally interested in, or felt passionate about. In the end, we decided to write three short stories each – incorporating a group of randomly generated list of five words for each story. We ran the app three times, generating three groups of five words each and set a maximum word count of 5,000. The only rule you must follow is to incorporate the set of five words into the corresponding story.

Since this is a somewhat long-term project, probably six to seven months, we have about two months to work on each story. In the end, we should each have three short stories that we’ve spent time discussing outlines, character sketches, and revising – revising – revising! I think it will be a great way for us all to bond and appreciate our different talents and styles.

When we’re done, we will hopefully feel it’s good enough to put out to the masses as a writing group experiment and see if people enjoy it. Today was our first meeting since settling on the idea, and it was great to see where everyone was in their process. I have less than some of the others, but I’ve grown comfortable with my own process – which includes a lot of thinking first, trying to breathe life into a wisp of an idea and see if it’s worth germinating. I like to hear it in my head first – can I separate it into three acts so I know I won’t struggle with the structure later? Can I evoke enough character traits before touching paper that I’m interested in seeing who they turn out to be?

It will certainly be interesting to see where this takes us! 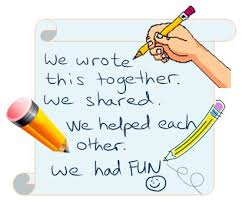